You are here: Home / Parks

DeVol Field is located just west of Downtown on the south side of Van Buren Street. It has 9 acres and is adjacent to Dreamland. The six tennis courts serve as home ground for the high school tennis team. Basketball, Sand Volleyball and Tennis is enjoyed at DeVol Field in the summer months, while sledding on DeVol hills is a winter pastime. There is also an asphalt walking/running trail around the park. Restrooms are open early April through early November.

Every Kids Dreamland is located just west of Downtown on the North side of Van Buren Street and is approximately 2 acres in size. Restrooms are open early April through early November.

Kenneth Wright Park is located on the south side of the City on South Whitley Street near Hanna Street. Newly acquired, it is approximately 3 acres. One of the wonderful features of this park is the handicapped swing set for those in wheelchairs. A pathway leading around the park for easy access is also a great feature of this park. There is basketball court and playground equipment. A flower garden planted along with the addition of a scenic overlook on the Blue River Trail for greater use and enjoyment.

Patriotic Park, formerly known as Northside Park, is a neighborhood park located on the north side of Columbia City on Reddick Avenue. It is also known as the City Water Tower Tot Lot. The park is about a city block in size and primarily serves nearby neighborhoods with unorganized activity with its basketball court, picnic tables and playground. Users of the park are primarily young children and teenagers. This is a great park to have a quiet picnic or sit under a tree reading a book. The Columbia City V.F.W. adopted this park as their project and will be planting trees, shrubs, and flowers. Although this park is still under the jurisdiction of the Columbia City Parks and Recreation Department, the V.F.W. will help to maintain the playground equipment.

Southside Park is located on Swihart Street on the south side of the City. It is also known as the Swihart Street Tot Lot. It is about a city block in size and primarily serves nearby neighborhoods with unorganized activity with its basketball court, picnic tables and playground.

Mayor Park was dedicated to Mayor Teghtmeyer and Mayor Zickgraf. Both mayors were very instrumental in getting this land for a city park. Mayor Park is located on North Columbia Parkway on the west side of the city and is basically a small park for local residents to relax. The Park contains a swing set and a 100 ft. woodchip trail. 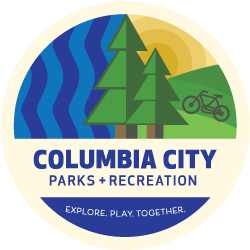